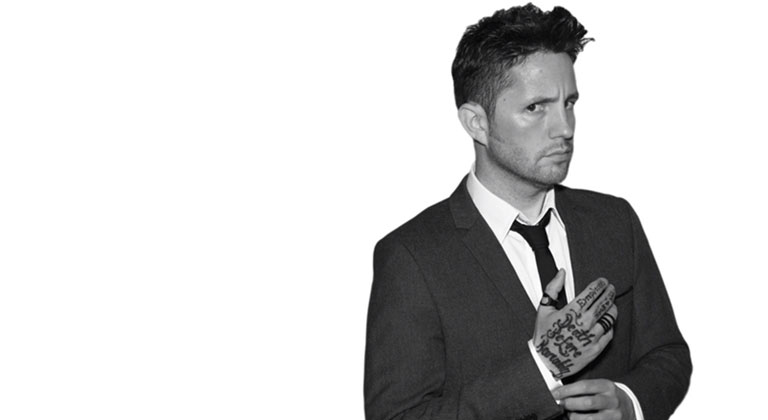 Continuing our series of author interviews, we were delighted to sit down live with Luke Smitherd, the best-selling author of The Stone Man and many other critically-acclaimed and popular novels.

One of the defining characteristics of the novels of Luke Smitherd is that they defy easy classification – which is somewhat true of himself, too. A former singer and guitarist – well-liked for his traveling homage to the likes of Michael Buble – Luke also played his hand as a professional darts play, commercial copywriter and much, much more. Today he’s a full-time writer with a loyal following who enjoy his unique and thought-provoking books; which I once described as “Stephen Kings meets Ben Elton.”

Luke very kindly sat and chatted with us live, and here’s what he had to say:

HG: Luke – your books aren’t easy to pin down as a specific genre, although you’ll often find them in the horror and sci-fi categories on Amazon. How would you describe your work?

HG: What inspired you to start writing and publishing?

LS: I actually wrote a book when I was at university – one that ended up getting lost and never got published. It was lost for, like, fifteen years – and actually, I recently finally released it as How To Be a Vigilante.

After that, I gave up writing completely until 2007. I went to a friend’s wedding and met a friend of his who was my age, who told me he’d got a two-book deal. I asked him: “How did you get it? Did you know anybody in the inside?” He said: “No, no, no.” So, I figured if he could do it, I could do it. That’s when I wrote Physics of the Dead. Then I discovered about publishing on the Kindle store – and that was that! 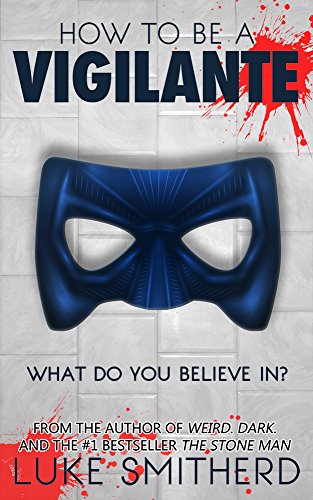 HG: Why did you pick the particularly un-particular genre you tend to write in?

LS: Well, I didn’t pick the genre specifically – it was just a case of deciding that these were the books I wanted to write. The kind of stories that have always fascinated me – not necessarily sci-fi, not necessarily horror… Just, high-concept stories – literally ‘speculative fiction’. The “what if this happened…” story, and the logistics of how that kind of thing might work…

I love those stories – that’s why I always liked Roald Dahl as a kid, because all of his stories seem to be about the logistics of his fantasies: Like the dreams in BFG. Dreams are little things floating around, going through your ears. Some are good, and some are bad… All these rules – that’s fascinating to me.

HG: Your book The Stone Man was a #1 best-seller on Amazon, and has over a thousand reviews. Your other books are successful and well-reviewed, too. Your main income is from writing… How did your writing career evolve, and when did you feel like you’d ‘made it’ as an author?

LS: Ha! I’ll let you know that when it happens! I don’t feel like I’ve ‘made it’ yet as an author. I’m still self-published – I mean, published by Audible, sure – but still waiting for a print publishing deal, and it would have to be the right deal. So, until I see my books in the bookshelves of Waterstones, or advertised on a billboard on the train platform, I won’t feel like I ‘made it’. 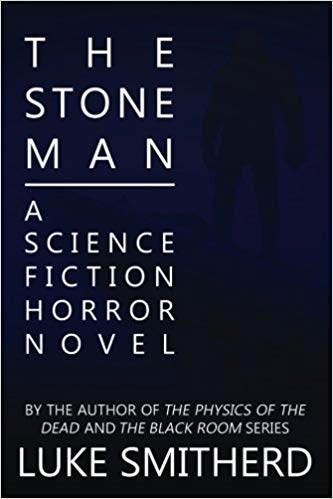 LS: I think being traditionally-published is still important because that’s where you’ll find the majority of readers you’re going to reach. It’s not just the prestige, but also the numbers thing. Yes, the royalty rate is much worse than self-publishing – but what you’ll then hopefully get – in an ideal world, with a good traditional publisher – is you’ll reach more readers, because they’ll support you with marketing; and marketing is something I’ve always struggled with.

HG: So, in addition to your writing you are involved in a podcast with another prodigiously-successful self-published author Matt Shaw. How did you get involved in that, and how did you end up meeting Matt Shaw?

LS: So, I met Matt Shaw at a small ACX event that I got invited to in London. I was sat at a table and he was sitting opposite me. Somebody was up on stage giving a talk and there was free wine at the table. Anyway, the glasses of wine were gone, but there was an unopened bottle of wine at the table, nobody was touching it. I kept looking at it until eventually I thought: “Oh, sod it, I’m having it.”

So, I opened the wine and started pouring it, and then I noticed this skinny guy sitting opposite me was looking at the wine hungrily – looking at the bottle exactly the way I had. So, the guy on stage was still talking – so I couldn’t exactly say anything – but I looked at him held the bottle out to him like: “You want some?” And he nodded, and he said “eyy” and we started drinking and got talking and became friends. And, I remember I had to go somewhere that day but Matt didn’t; and apparently he got really drunk that day and ended up blowing 200 quid in Forbidden Planet and getting a bollocking from his wife!

I remember he put on Facebook that he was looking to start a podcast and was anybody interested in doing one with him. Originally, he wanted to do something book-based – but I’d had an idea for a podcast for some time so I pitched that format to him, and we took it from there. We’ve been doing it for quite a while now! The podcast is called: Are You Sure? With Smitherd and Shaw and it’s available on iTunes and Stitcher or wherever you get your podcasts.

HG: What does your daily writing schedule look like?

LS: My daily writing schedule? Well, I try to do it daily – but it depends because I end up being on the road quite a lot, which gets in the way of that. But what I try to do on a daily basis is try and do some exercise for 20 minutes, because I gather that exercise releases dopamine which is really good for creativity and I’m a little ADHD – not fully ADHD, but a little ADHD – and apparently exercise is very good for that. So, I get up, have breakfast, do that, and then I try to do 3 hours a day – but I need to space that out, because I find after an hour my attention’s wandering and I need a break.

HG: In terms of ‘making it’ – the audio-book version of The Stone Man was shortlisted for Audible’s Book of the Year in 2015, right next to JK Rowling. How did that make you feel?

LS: Getting listed next to JK Rowling was really cool, but it was also daunting. I don’t know – I kind of feel like that about a lot of my career; a lot of ‘imposter syndrome’. Just the other day, a member of my family went to get an eye test and when they went to get checked, in the person saw the surname and apparently recognized it. They said: “Smitherd’s quite a rare name, are you related to Luke Smitherd by any chance? And he said: ‘yes’ and apparently the person at the desk was freaking out, saying: “Wow I’ve read all his books.”

HG: You mention your struggle with ‘impostor syndrome.’ How have you overcome that?

HG: You’re young and child-free, and your writing supports you. As such you travel a lot – you’re always off somewhere new. The writing fuels the travelling, but does it work the other way around? Does the travelling help with the writing?

LS: Actually, the travelling actually gets in the way of the writing because if I’ve paid money to go somewhere – because I have a tendency to overthink everything – I’m, like: I’ve paid money to be here, so I should really take everything in. So, I try and fit my writing around that. It’s difficult, but worth it, obviously.

HG: So, what are you working on now?

LS: I’m working on a novel that I’ve been working for about a year and a half – tweaking it, starting it, stopping it… But I think I’ve got it between my teeth now, and it should see the light of day early next year.

HG: As an established author, do you have any advice for writers looking to get their work in front of more readers? In terms of writing, promotion or advertising?

LS: Firstly, be very very wary of where you spend your money – because there are a lot of people peddling s**t out there. Because they know every self-published author is desperate to find an audience, and there are a lot of people willing to prey on that. So, just be careful when looking for promotions; because when people say I’ve got “however many” subscribers, unless those numbers are the very high hundreds of thousands or the millions I’d steer clear.

Secondly, it might sound really be obvious, but pay a lot of attention to your titles – and I wouldn’t look to me! Because I don’t think – it’s very damning for an author to say this about himself – but in hindsight – in hindsight – while a lot of my titles are good – I like them – are they great titles? I don’t know. In terms of The Stone Man – I don’t mean to sound like a dick, but that was a great title, and a huge part of the book’s success. So ask yourself: Is your title going to stand out on Amazon?

Also – don’t be afraid to change the covers around, and try new things. As I said earlier, it took three covers before The Stone Man was successful.

Thirdly, don’t be too prideful to be blatant in telling readers to leave reviews and share your stuff. If there’s one thing I learned back in my days in radio advertising, it’s that people don’t act unless they’ve heard something three times. Even people with good intentions, who say: “I really enjoyed that, I’m going to leave a review.” Well, they’d end up going to go to work and forgetting, or their wives will talk to them, or their kids will talk to them, or they’ll get sick – and they’ll just end up not doing it.

So ask. I’ve kind of made it into a running joke about asking, and the reason it’s funny is because everybody knows I mean it! If you’re an unknown author, your pride has to take a back seat – to a degree, don’t chill out on your principles – but you can’t afford to have an ego. I’ve spoken to authors who told me: “I’m not going to just give this book away” and I’m like: Who are you to say that? You’re not only asking people for money to buy it, but you’re also asking for their time in reading it, both of which are worth a lot. To say that “I’m not doing it for free” that’s quite an arrogant thing for a new writer to say.

There are a lot of people who might disagree with that and say “you’ve got to understand the value of your own art” – and I totally agree with that – but at the same time, don’t be offended if nobody buys your stuff or reviews it because they don’t know who you are.

HG: Finally, if there are readers out there looking to get into your books – where would you suggest they start?

LS: Everybody knows about The Stone Man, but I’d say to them – give In The Darkness a chance.

Thanks so much to Luke for taking the time to chat to us! Go and check out his books – and remember, if you’re looking to read and review books like Luke’s, including horror, sci-fi and a total of 16 genres – sign up to Hidden Gems now! 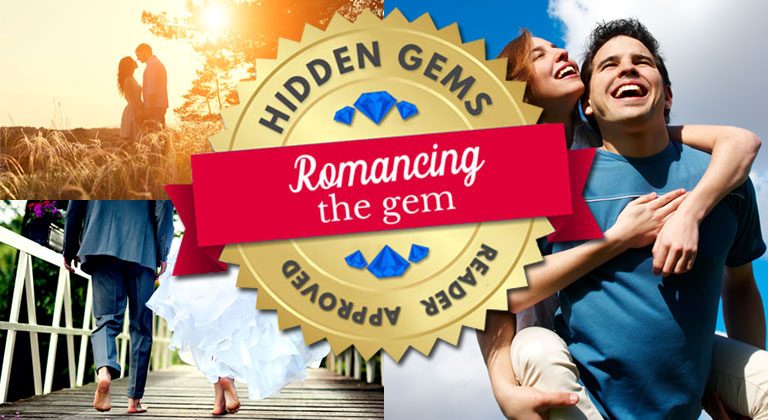 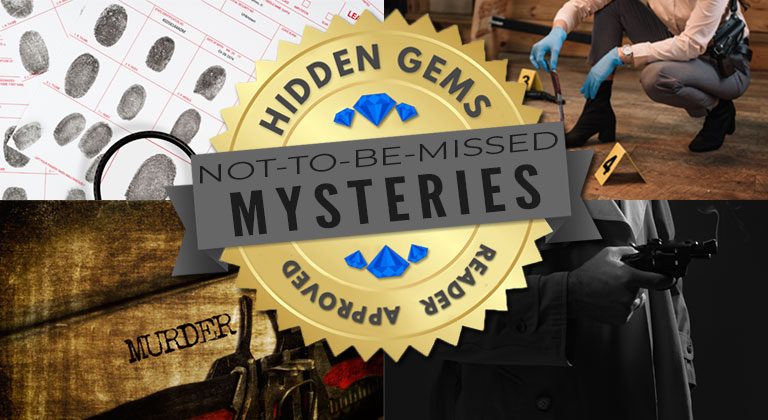