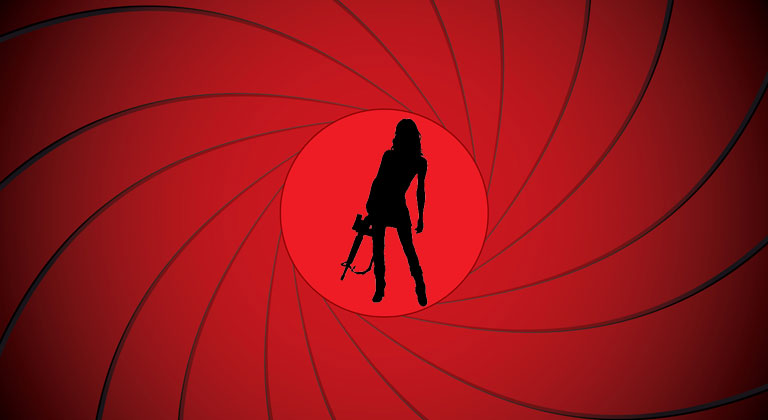 From Atomic Blonde to the new Star Wars movies, it seems like everybody is crying out for strong female characters – but not all female heroes are created equal. Here are five books series with a thrilling female lead – all of which are also great reads.

In 2017, the movie Wonder Woman exploded into movie theaters, and columns across the Internet were penned proclaiming: “Finally! A female action star!” Those of us of a certain age remember previous female action heroes, though – like Sigourney Weaver in Aliens or Linda Hamilton in Terminator. Nobody seemed to make a big deal about the fearless Ellen Ripley being female, or Sarah Connor being the ultimate overprotective mama bear – and I think modern female-focused movies and books have a lot to learn from these older characters.

Representation is important, and it’s fantastic that more movies and book series are being created that focus on female protagonists. However, these modern franchises have to be careful not to do themselves a disservice by focusing too much on the simple fact that the female leads are ‘strong’ and not enough on a much more important part of storytelling – their ‘character’.

I think there’s a temptation for writers to make a female character ‘strong’ by giving her non-contextual abilities that make no sense in terms of storytelling; like the character of Princess Fiona in Shrek knowing enough martial arts to kick Robin Hood’s men about, despite having lived in isolation in the top of a tower since she was a little girl.

“Just make her know karate, or something,” I can imagine some scriptwriter musing. “That’ll make her strong.”

More recently, the press junkets for the new Jurassic World franchise made a big deal that Bryce Dallas Howard’s character, Claire Dearing, was as much of a heroic lead as Chris Pratt’s Owen Grady. Director Colin Trevorrow even claimed she was the ‘real protagonist’ of the movie, and the Hollywood Reporter argued that it made perfect sense for her to do nonsensical things because of her gender – for example, being able to outrun a Tyrannosaurus Rex while wearing high heels because “that’s what women do.”

Entertainment designer Mike Hill, on the other hand, made a compelling video explaining what a horrible character she was – comparing her to corporate sellout Burke from the Aliens movie – and that she just demonstrates everything that’s wrong with supposedly ‘strong’ female characters in today’s movies.

At the core of the issue is the concept of ‘strength.’ For generations, movies and books have focused on male characters and nobody disagrees that it’s time to balance that out with strong female heroes. But what makes traditional male characters ‘strong’ is rooted in characterization – and it’s something that modern writers seem to miss out on when they’re trying to punch out ‘strong female characters’ to order.

James Bond, for example, is ‘strong’ because of his cold-heart, emotional repression and ruthlessness – allowing him to do the things normal people couldn’t do.  Sherlock Holmes has been described as being on the Autism spectrum, and was a cocaine addict to boot. His brilliance emerged from his flaws in the same way as Bond’s. More recently, epic characters like Lee Child‘s Jack Reacher have physical strength, but once again it’s the character’s flaws – and his efforts to overcome them – which demonstrate where this strength came from.

To go back to the examples of ‘strong’ female characters from the 1980s, Ellen Ripley and Sarah Connor were both regular folk thrown into life-or-death circumstances who emerged as strong, deadly badasses as a result. Their strength had context behind it, and I think that’s something that’s missing from our modern-day rush to just cheat-code our way into ‘strong female characters.’

You can’t have a ‘strong’ female character without focusing on the character part before anything else.

I use examples from movies, because most people are familiar with these characters – but it’s a challenge that extends into literature as well. These days there is more of a push to have female hero characters in traditionally male-dominated areas of fiction, like thrillers. But the same danger arises – authors using artificial or cynical devices to make their female characters appear ‘strong’ without that strength emerging from genuine characterization.

Below are five thriller series with female heroes that I argue deftly avoid that issue – and feature strong, well-written female protagonists whose ‘strength’ comes from their experiences and character, not some convenient plot device. 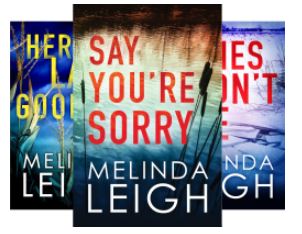 Morgan used to be a successful prosecutor, but turned her back on her high-profile career following her husband’s death in Iraq. That background in prosecution comes in handy, though, when she stumbles into more and more murky cases of murder and mayhem, and has to stand up to defend people she believes are innocent of the crimes for which they’ve been accused.

Morgan is the perfect example of a ‘strong female character’ because her legal competence comes from a long and prestigious career as a deputy prosecutor, and her bravery comes from an innate sense of personal justice. Author Melinda Leigh crafted a truly believable hero who is easy to respect, but also easy to relate to, and that’s why reading this book series is so easy to get into; and so difficult to escape from! 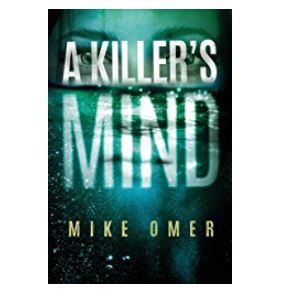 Previously only available in print, the debut novel in the Zoe Bentley Mystery series is about to be released on Kindle for the first time, and the first follow-up is planned for release next year.

Fans of TV shows like Bones will love the character of forensic psychologist Zoe Bentley, who is as antagonistic as she is brilliant. With the help – or hindrance – of FBI Special Agent Tatum Gray, she’s got to track down a Chicago serial killer who likes to embalm and then pose his victims in grisly scenes; and time is running out to prevent more murders.

Some critics have complained that Zoe is a ‘trope’ – in that she’s professionally brilliant, but also ‘a bit of a bitch.’ However, author Mike Omer manages to craft that as part of the reason for her strength. She’s a woman succeeding in a grisly and male-dominated profession, and her ‘strength’ is also the source of her vulnerability; which is the essence of good characterization. 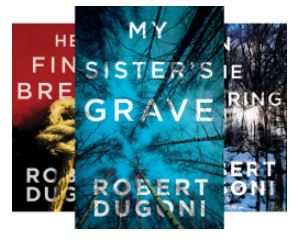 Twenty years ago, Tracy’s sister disappeared – presumed murdered. Since then, Tracy had dedicated her life to tracking down her sister’s true killer, by becoming one of the most respected cops in Seattle. That dedication puts her in the perfect position to solve other unsolved murders.

People complain about the trope of ‘fridging‘ female characters in order to provide protagonists with motivation – but nobody seems to mind that Batman has spent 70 years avenging the murder of his parents. That’s why I think the origins and motivations of Robert Dugoni’s hard-boiled female hero are so believable. Tracy Crosswhite dedicated her life to solving her sister’s murder; and the six books of this thrilling series explore her tackling other, similarly-unsolved crimes.

To me, the appeal of Dugoni’s series is that it follows both the procedural aspects of Crosswhite’s investigations – but also the trials that follow. Too many thrillers end with the suspect in handcuffs. These books follow the story further; as Tracy is forced to prove that her detective work is worthy of securing a prosecution. 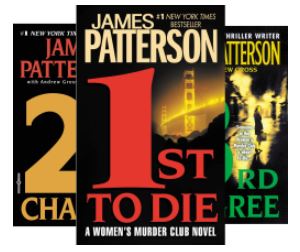 Strong women lift each other up – and that’s the theme for the original female-focused thriller series, from legendary author James Patterson.

James Patterson is the best-selling author in the world, and his team of writers churn out a prodigious number of books each and every year. Back before his empire became such a machine, he helped pioneer the idea of a female-focused thriller series with The Women’s Murder Club series, which follows four women in law enforcement who bypass their superiors to help each other out in solving crimes.

There’s Lindsay, a homicide inspector, Claire, a medical examiner, Jill, an assistant D.A., and Cindy, a crime reporter for the San Francisco Chronicle. Together, over an incredible 17-book series, they tackle some of the toughest crimes to ever occur in the Bay area; and their biggest strength is in the support they give each other to get the job done.

Later installments follow Patterson’s rather cynical process of being ghost or co-written by other talented authors; but while James Patterson is pretty hands off with the series now, there’s no denying that he helped establish the demand for female-focused thriller fiction which has grown exponentially since the first book in this series was released in 2001. 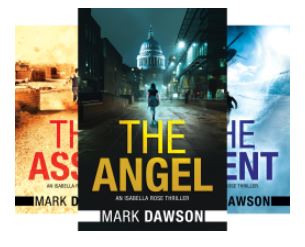 I always like to round out these lists with a personal favorite, and I’m particularly fond of the Isabella Rose series by renowned self-publishing sensation Mark Dawson.

Perhaps best-known for his John Milton books, which are often compared to those of Lee Child, Dawson managed to truly create something unique when he invented the mysterious operative known as the Angel.

I personally love Mark Dawson’s books, although he’s often accused of being derivative – with his John Milton books compared to the Jack Reacher series, and his character of Beatrix Rose being compared to The Bride from the infamous Kill Bill movies. With Isabella Rose – Beatrix’s daughter – he’s truly found virgin territory to explore; and created a believable, powerful female hero who has a whole library of previous books that establish her character and backstory.

This four-book series – with more on the way – follows an unpredictable path as it takes Isabella and her former handler, Michael Pope, on a journey from the center of London to India, Mexico and beyond. They’re thrilling reads, and all the better for having been so well established in Dawson’s previous books.

Love thrillers with strong female leads? You’ll find plenty on a regular basis as part of the Hidden Gems Books reader review program. Sign up now and get books just like these to read and review for free. 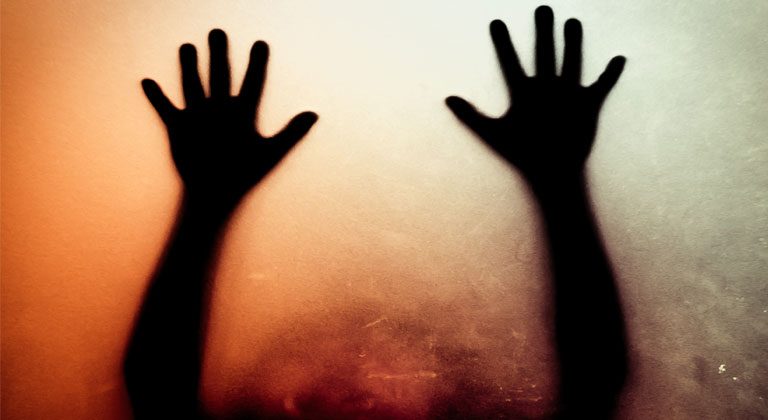 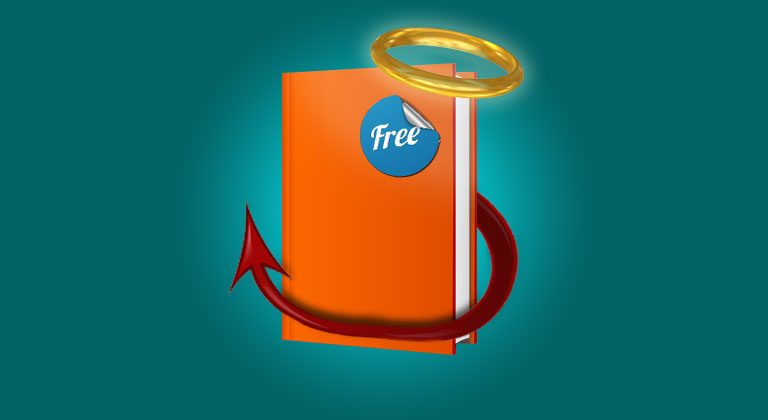